What are all those pieces of hardware on your Android tablet? 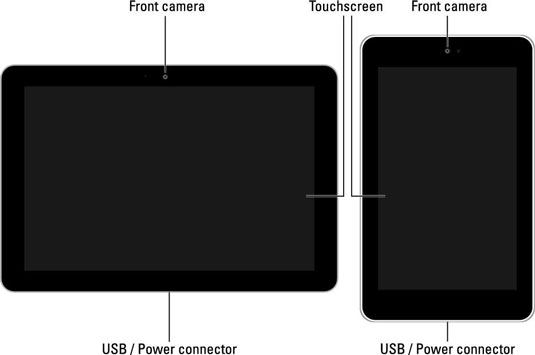 Power switch/lock: The power switch/lock is labeled with the universal power symbol, as shown in the margin, although the symbol is hard to see. Press this key to turn the tablet on, lock it (put it to sleep), wake it up, and turn it off.
Volume key: The volume control of the tablet consists of two buttons in one. Press one side of the switch to set the volume higher or the other side to set the volume lower. This key is often located next to the on/off switch. It is the larger of the two.
USB/Power connector: This slot is where you plug in a USB cable, which is used to charge the battery and connect your Android tablet to a computer. The slot is also where the tablet connects to the dock, if one is available.
External storage slot: The external storage of the tablet is added by inserting a memory card into the external storage slot.
SIM card cover: This spot is used to access the SIM card of the cellular tablet, which is inserted into a slot under the cover.
Headphone jack: This opening is where you can plug in standard headphones.
HDMI connector: Use this slot to connect an HDMI cable. The other end of the cable fits into an HDMI TV or monitor, which you can use to display tablet content on a larger screen. Not every Android tablet has an HDMI connector.
Speakers (Speakers): Stereo speakers are located on the left and right on the tablet, sometimes on the front, often on the sides, sometimes on the back.
Microphone: A small circular hole that acts as a microphone for the device. Some tablets may have two microphone holes. Don’t worry if you don’t find them. They are there.
A typical Android also has a back side: on it you may find the main camera of the tablet and an LED flash. That’s it.
Samsung tablets have a Home button or Home key just below the touch screen. This physical button serves the same purpose as the Home icon on other Android tablets.