If you want to speed up your computer, then you need to know how to use Task Manager to monitor computer status in Windows Vista. Previous versions of Windows hid performance data in dozens of obscure nooks and crannies, but in Vista, the tools you need to highlight lags are just a few clicks away.
Be skeptical of claims that you can speed up Vista by disabling some specific services or making some simple changes to the registry. Some people might try to convince you that uninstalling some obscure part of Vista or deleting a program that somehow performs superhuman duties makes the system faster and more secure. These same people seem puzzled when Vista suddenly stops working.
If you’ve ever come face-to-face with a Vista cursor chasing circles and watched and watched while your system seemed to do absolutely nothing, there are things you can do that might make you feel better. Task Manager is a good place to start.
You can bring up the task manager in several ways:
>>Click Start, type taskmgr in the start search text box, and press Enter.
>>Press Ctrl + Alt + Del and then select Start Task Manager from the login screen menu.
>>Choose Start → Control Panel → System and Maintenance → Performance Information and Tools. From the resulting dialog, click the link at the bottom selected Advanced Tools. Then click Open Task Manager.
When the task manager is up and running, click the performance tab to monitor your computer’s CPU away, and follow the wobble line that shows the percentage of memory used. 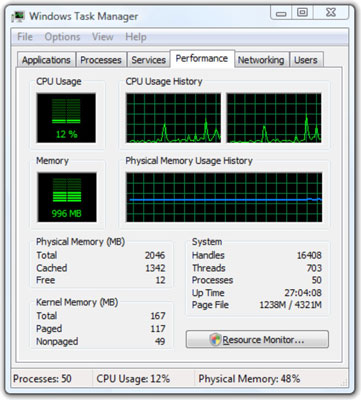 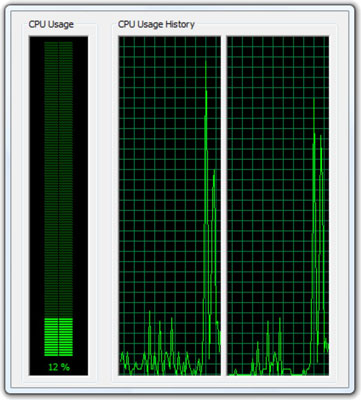 Although some people like to keep an eye on CPU usage just to see how fast the grass grows, most people are on the lookout for something really going haywire. If your CPU usage goes up to 100% when you start a program and stays there for more than a few seconds, something is probably wrong — a lot of overheard from old, unused add-ons, for example, or maybe a startup file that has grown too large.
If CPU usage pegs at 100% for more than a minute, when you’ve never had a problem before, Windows Vista itself could be the culprit. Microsoft has released several faulty patches that drive applications up to 100% CPU usage for extended periods. If you suspect a bad patch, go online and ask.