In Unix, the underlying operating system that runs OS X and the applications and other things that happen behind the scenes are called processes. Each application and the operating system itself can run a number of processes at the same time.
In the following figure, you see 78 different processes running, most of them behind the scenes. Note that when this photo was taken, six or more programs were running, including Finder, FaceTime, the Mac App Store, and Activity Monitor itself. 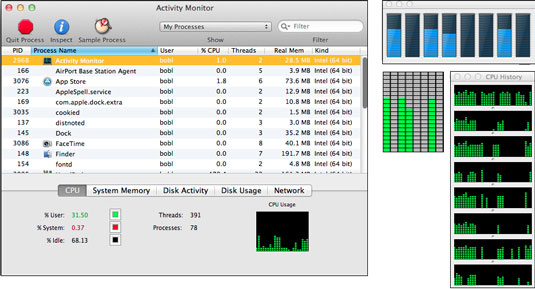 Geeks and troubleshooters (and even you) can use Activity Monitor to determine which processes are running, who owns the process, and how much CPU and memory the process is using. You can even use this feature to terminate or force termination of a process that you think might be causing you problems.
Messing around with Activity Monitor is not a good idea for most users. If you’re having problems with an app or with OS X, try to quit open apps; Force terminate applications (press Command + Option + Esc – “Three Fingers Salute” for Mac); Or log out and log back in before you start fiddling with processes.